some time has passed by since I released my first game, and you all are surely wondering what’s up next here. After the release I patched some bugs and added some additional features to PGR!. With the beginning of 2015 I started playing around with Unity a bit and I liked it so much that I wanted to build my next game with it. If you have been following me on Twitter you might have seen me posting the one or other picture from this new game, and up until today I progressed so far in development that I can present you the first official screenshots of the new game: 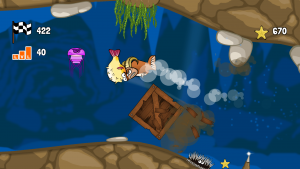 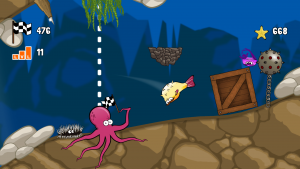 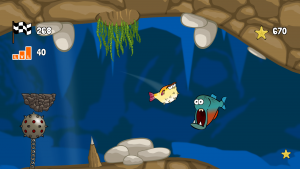 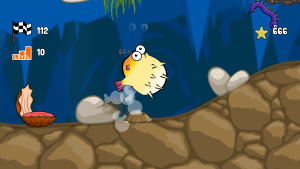 As you can tell from the images it is a cartoon-styled 2D sidescroller with an underwater theme. You are the yellow blowfish, that unfortunately has lost its ability to swim and therefore needs to be catapulted across the level by pulling on its tail and releasing it so it flicks the fish forward. The game starts out simple, but adds in more and more elements and obstacles that you’ll need to overcome. All the levels in the game are procedurally generated which gives you a fresh challenge every time you start, but unlike most endless runners / scrollers there are checkpoints that save your progress and it is actually possible to beat the game. I think about adding an additional endless mode where you can compete for scores as well.
The game has no name yet, but I think I’ll come up with one soon.